CROW PEOPLE came from some pit village near Doncaster but they seemed to play an awful lot of gigs in the ‘industrial garden town’ of Scunthorpe.

I first remember coming across them at one such packed, sweaty gig in the mid-Eighties, although when I ran into Mark (who now has a teenage daughter and a career as a teacher) at the Flux gig at the 1in12 in Bradford last year, he told me that we’d actually met a good few years before when I was wandering around the Arndale in Doncaster, trying to sell records I didn’t want to unsuspecting punk rockers. It’s news to me.

Although they only released a couple of records throughout their career, they never got any press attention (apart from the stuff I wrote myself) and were barely known outside our little patch of South Yorkshire / North Lincolnshire, Crow People were a tremendous live band.

I used to get absolutely blasted, sit on the floor cross-legged and spin-out to their chugging, swirling, psychedelic space-rock. Way fucking cool.

I even ended up putting them on in Leeds, at this mad Leeds Abortion Fund benefit at Leeds Poly with the Wedding Present offshoot the Ukrainians and LS6 indie-sirens Sharon. Coming through a decent PA, Crow People just sounded extraordinarily powerful and intense  – though the evening was marred when, at a crazy post-gig party at the Sharon girls’ house, one of their knobhead mates from Donny had an argument with his missus and trashed Paddy’s bedroom.

Their lack of recognition always baffled me.

They released a couple of records on Armstrong’s Meantime label but I have no mp3s for you, I’m afraid. I lost my copy of Cloud Songs years ago. Anyone has a spare, or even photographs of the band, well, you know where I am ..

In the meantime, here’s an interview I did with Mark for GRUNT magazine in 1988.

CAN you remember that bloke in the Wurzel Gummidge stories called the Crow Man? He used to breath life into the raggy-arsed scarecrows and, when the occasion demanded it, he used to give them a bit of a kick up the arse too.

Well – here comes the tortuous analogy – there’s a band from Doncaster who I think do more or less the same for the raggy-arsed remnants of what we used to call anarcho punk – though the band themselves would be the first to deny such a high and mighty claim.

Like the best of their contemporaries in what remains of the scene (Culture Shock, Chumbawamba, Jackdaw With Crowbar) the way that Crow People get their ideas across is every bit as important as the actual ideas. The emphasis is back on communication – and about time too. 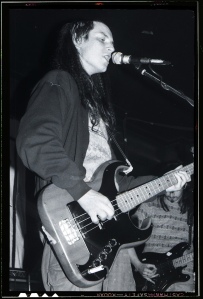 “We definitely did come out of that scene,” says singer and bassist Mark Crow Person (pictured). “But we found that it had become repetitive, in that once people grasp onto something, they tend to reiterate it over and over again, and it gradually moves into stagnation.

“People have seen these lyrics about animal torture or nuclear warfare so many times that they take them as a statutory reality instead of thinking about it a bit further.”

Crow People’s lyrics have been described as ‘obscure’. What do you make of that?

“That would suggest that they’re abstract, that they’re alienating the people hearing them, and I don’t think that’s true,” says Mark. “Basically, on Cloud Songs [the band’s first 12-inch on Darlington’s Meantime Records] we were trying to portray a feeling of alienation. They don’t fit into the format that’s acceptable.

“I’m not trying to say that we’re particularly original, I just think that it’s important that if bands are going to write lyrics, they may as well be as important as the music, they ought to try to do something different whether it’s successful or not.”

Since they started working together four years ago, Crow People have moved a long way from their punk rock beginnings. Their music is a bit more subtle these days. A bit more measured.

“That’s true. I’d put that down to naivety, as well as ability – or lack of it. It’s not true in all cases, but when you first form a band, as long as you can play a powerchord you can construct a few songs and they’ll sound alright.”

Seeing Crow People live, you experience a bewildering but wonderfully enjoyable mixture of some of the most powerful rock songs you could ever imagine coming out of Doncaster and some of the fragile and delicate. One minute they’re sending you reeling with the sheer mindblowing intensity of songs like Crying and then the next they’re caressing you with the almost sedate Nightmares. The one constant is an emphasis on melody and honest-to-goodness tunes.

And despite the rather miserable titles, Crow People inspire pure, simple, unadulterated joy – in this writer at least.

If you ever get to see Crow People live, chances are, it’ll be at a benefit gig. They don’t seem to play at any other kind of gig.

“Apart from the entertainment value – you go along, you get pissed, have a good time and try to decipher what the bands are saying – I think you may as well use gigs for something beneficial. You kill two birds with one stone,” explains Mark.

Three-quarters of the band (new drummer Dallas, occasional singer Gav and Mark himself) now live in Leeds, leaving guitarist Bill the guitarist on his todd in South Yorkshire. Why the move?

“Cos I don’t like it there very much,” answers Mark with a laugh. “Nothing’s going on, no gigs, a total lack of spirit, especially for the size of the place. Here, there seems to be a cohesive spirit, a lot of people who are interested in doing something. In Doncaster, it all seems based around a drug culture that passes for an ‘alternative scene’. Not everyone is like that, but a lot of them are.”

Let’s talk about the important stuff now, Mark. Tell me about heavy metal.

“I don’t want to comment too critically on people into that kind of thing. Obviously, it’s up to them and if they can get something from it, that’s fair enough. I can’t see it offers that much.”

See also interviews with Flux, the Mob and D&V