IT’S nine o’clock on a cold Saturday evening and Ali Cooke and Dave Beer are in their tiny office in the labyrinthine Music Factory, looking suitably shagged out after a trip to the Royal Albert Hall to collect Back to Basics’ prestigious Mixmag club of the year award last night.

The two bleary-eyed promoters clearly enjoyed the occasion to the full. They are not at their best. And all this less than a year after the club’s first night.

“I didn’t even realise you got awards for stuff like that,” Beer says. “When we set the club up, it’s not as if we did it to put ourselves in the limelight.”

“Dave wanted to go to a club where he’d like the music and the people around him,” adds Cooke, who also DJs at Basics. “And I wanted the chance to play the kind of music I want to play.” 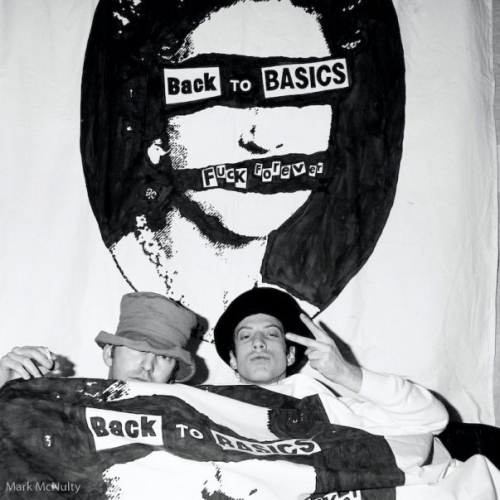 Back to Basics was different to the ravier end of the market right from the very start, promising to “go three steps further than any other fucker” and over the past year it has redefined, to a certain extent, what’s cool and what’s not on a notoriously fickle club scene.

“We wanted something more relaxed that all the usual mental raving,” says Beer. “That’s why we have a strong door policy. We want people who are into the music rather than people who are coming down and getting wasted and sitting around on the floor all night.”

The club’s flyers emphasised the difference between Basics and everyone else, using both humour and Jamie Reid montages to set out the club’s stall. Whereas most club and rave flyers (then and now) were full of sunbeams and thinly-veiled references to ecstasy, Basics flyers included the warning: “The management reserves the right to politely fuck you off.”

“We were just pissed off with all that Loveboat shit,” explains Beer.

“It just seemed funnier to have a picture of Elvis with his dick out on the front,” adds Cooke, managing to get a sentence in edgeways as Beer takes a rare pause for breath. “And it’s nice to swear on flyers.”

But above all, it’s the music that has played the largest role in establishing the club’s reputation.

“We have a policy of no policy, really,” says Cooke in between bleeps from the intercom as someone else tries to blag the door downstairs. “It’s about playing what you want.”

Residents Cooke and Ralph Lawson provide a solid base of proper, grown-up house and more alternative fare for guests like Andy Weatherall, Lisa Loud, Terry Farley and Mike Pickering to work from [one of Cooke’s charts from earlier in the year features Severed Heads, Boney M and My Bloody Valentine as well as Espiral, Elixir Vitae and Coco, Steel and Lovebomb].

Of course, all this didn’t happen overnight. Basics, it seems, took years of planning.

“We’ve known each other for years,” says Cooke. “We used to play in bands together in Wakefield. They were pretty shit but we always knew what we wanted to look like. It never really happened until now.”

“We weren’t even sure it was going to work in the beginning,” says Beer. “We came into a gay club in town, nobody went there, in fact nobody would be seen dead there…”

Apart from the regular clientele, no?

“We got one floor on a Saturday night, decked the place out like a grotto and got 250 people who were into the same things we were.”

The pair firmly believe that, as Cooke puts it, “you can create a really good atmosphere by having a little bit of an attitude. Like, dressing up to go out, not posing but feeling good about themselves.”

“Some people can’t understand why we had Elvis Presley on but you can’t take it too seriously .. it’s all a bit of a laugh,” adds Beer. “We’re into anything that’s slightly off the wall, anything that people can be stimulated by. That’s why we have wizards wandering round doing magic, little bits of performance art, the Jamie Reid exhibition. It’s all part of it.”

The highpoint of this mad year for Cooke was Andrew Weatherall DJing at Basics for the first time:

“I felt like it had been christened. He’s a bit of a hero to me.”

And as for Beer:

“It was my mum coming down, I reckon, and getting it on with Jon Kelly on the dancefloor.

“They tend to be on Monday morning when you’re recovering from what’s just happened.”

Monday mornings excepted, Beer and Cooke are sitting pretty at the moment. The club is full every week and offers of work are coming in from all over the place. It’s been a good year and the sky is the limit.

“We get a nice wage out of it, it must be said,” grins Beer. “We’re lucky lads aren’t we? We realise it. Luck shone on us one day and said, have a bit of this.

“We’ve had our fair share of shit as well though.”

[Originally published in the Northern Star magazine in November 1992. Excellent photo of Dave and Ali by Mark McNulty]