I MET John White aka UV Pop when I bunked off sixth form and went over to Doncaster with some girl I was seeing at the time to interview Marcus Featherby about his label, Pax. I’d come into contact with Marcus through the punk gigs he promoted at the Marples in Sheffield. I’d never met anyone quite like either of them before.

At the time, Marcus was staying at John’s two-up-two-down in Bentley. My most vivid memory is the heating not being on, despite it being a very cold Yorkshire winter, but then again, I was still living with my parents, and didn’t have to worry about paying for leccy. And I think my girlfriend was much more impressed with both John and Marcus than she was with me.

Marcus gave me a copy of the debut, Cabs-produced UV Pop single, and I was impressed enough to interview John for my fanzine. I have no clue whether we did the interview in person or through the post.

People being vegetarian seemed to be really important to me at the time (I’d gone veggie about six months earlier, so I had the conviction of the convert), and I had yet to work out the world was coloured in various shades of grey rather than the black and white certainty I so clearly craved.

I’d like to say my interview technique is more subtle and nuanced these days but it really isn’t.

I can’t find any activity for UV Pop (who eventually became a proper band despite John’s reservations), beyond 2012, but I hope John is still making music.

Where does the name come from?

“Well, originally, I was thinking of calling it just my name, John White. But the more I said it and saw it, I just didn’t like the sound of it at all. I couldn’t imagine going up to see someone at a club and their being called ‘John White’. 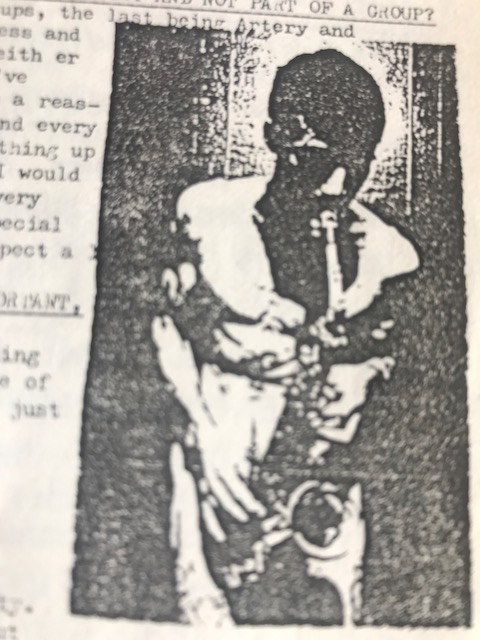 “So, I started scratching Letraset out on a piece of paper, looking for an image more than a name. And U and V were together and I kept looking at them and thinking, that’s quite good. Then I thought, what about pop music?

“UV Pop. It’s just an image, not a name. It’s got no literal meaning whatsoever. It’s just got a look that makes you remember it.”

How would you describe your music? If you would describe it?

“Well, the last bit of the question really answers it. I couldn’t really start to describe it because, as you’ve probably gathered now, it stretches from melodic ballads to ‘unstructured experimentalism’. It covers a really broad area.”

“It was a one-off single arrangement with Marcus (Featherby). You’ll probably laugh, but, originally, he asked me to record one of my anti-war songs for Wargasm. I went in and did it with Cabaret Voltaire at Western Works and, when I came back, I gave the master tape to Marcus. I thought it was for the album. But, his real intention was to fetch out a single for my birthday because he’d been living with me in this house and he wanted to have some way of repaying me.

“He didn’t want to get involve in a record deal because of our personal relationship, and the plan was to walk in on my birthday with an armful of singles and say, ‘your record’s out today’ but I had to be told about it because there were some slight problems with the sleeve.”

Do you think you can change anything through music or is it just aural wallpaper?

“I wouldn’t go so far as to say my music is aural wallpaper but I don’t think you can change anything through music either. My definition of wallpaper music is something that happens and you don’t take any notice of it, it’s background muzak. I don’t think the Clash ever changed anything, or any other protest bands. You can set up a mad cult following but that’ll just die off.”

I don’t agree. I know loads of people who have turned vegetarian after listening to certain records – myself included.

“You’ve got me there. I never thought of that. I know a lot of people who changed to vegetarianism because of that Flux single. And also, it’s not very on when people murder animals so they can wear lipstick or whatever. But there again, you might jump down my throat but I think that if by doing experiments on animals they can cure cancer and things then maybe it’s not such a bad idea.” 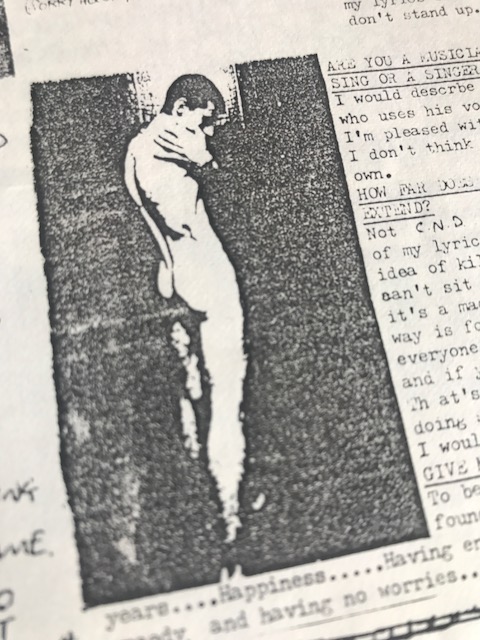 Having heard Just a Game, do you feel strongly about bringing kids up with death and violence all around them?

“Yes, I do. I’d never buy my son a war game of any kind. But, having said that, he can watch TV any night and see things that at one time wouldn’t have even got an X certificate at the cinema. I agree with people being made aware of what’s happening, I don’t believe in cutting the nasty bits because it might offend people, but it can’t be helped. I don’t know of a better way to bring up kids.”

What is No Songs Tomorrow about?

“When I was about 14, I had an air rifle, and I used to go out round the fields shooting at trees and bushes, and one day I shot and killed a bird. I felt really upset about it. I got rid of the gun because of it. It really cut me up. I thought about it for months and months.”

Why have you chosen to work as a solo artist and not part of a group?

“I’ve been in five groups, the last being Artery, and normally, because of stubbornness and an unwillingness to compromise, either me or the group, we’ve parted company. I want to be a reasonably successful musician and every time I started to build something up, it falls to pieces. A group I would be in would have to be very, very committed people. Very, very special people. I give a lot and I expect a lot back.”

Are you a musician who can sing or a singer who can play?

“I would describe myself as a musician who uses his voice to his very best ability. I’m pleased with some of my lyrics but I don’t think they stand up on their own.”

How far does your sympathy for CND extend?

“Not CND but disarmament. As some of my lyrics suggest, I don’t like the idea of killing because two governments can’t sit down and agree something. It’s a mad want for power and the only way is for everybody to get rid. I think everyone’s got aggression inside them. If you lose your temper and swear, that’s aggression. If I found someone doing something awful to my little boy, I wouldn’t be able to hold back.”

Give me your definition of happiness.

“To be above the poverty line which I’ve found myself on for the last couple of years. Happiness is having enough of what you want without being greedy, and having no worries.”