I DISCOVERED Hyperculte’s first album while browsing the racks of the in-house record shop at the super-organised and consistently inspiring Zoro squat venue in Leipzig, left there, no doubt, when the hard-working Swiss / French duo (or one of their other musical projects) played a gig in the former vinyl factory.

I can’t think of anywhere better.

I don’t recall what particular section the self-titled album was filed in but, in truth, it could have been any of them. Avant-garde jazz-punk? Pre-kraut post-disco? Trance pop? Take your pick. Hyperculte seem pretty relaxed about genre, categories and boxes. 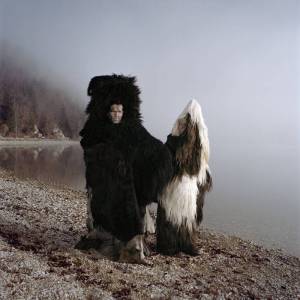 What I do remember is being struck by the cover image for the album, which featured the duo wearing decidedly un-ironic and bizarre out-size furry costumes by the side of a misty, fairytale lake.

If these hairy chimeras came from some kind of fairy tale, it was clearly one that was infinitely darker, earthier and more primal than the cuddly, sanitised morality tales parents send kids to sleep with today.

In fact, Diego Sanchez’s hugely evocative photography hints at the kind of ancient, amoral, pine-scented central European folklore upon which all that Disney shit is ultimately based.

You can sense a stillness that has sustained for centuries.

It was mysterious, elegant and beautiful. And weird as fuck.

Reader, I bought it.