SOMETIMES I think the world is simply too weird without Mark E Smith. Other times, I think it’s not weird enough.

Either way, I miss him. I wish he was still around to enlighten us with his opinion on the hole we find ourselves in today. I wish we had a new Fall album to look forward to rather than an unstoppable stream of reissues of varying quality and morality.

And I wish I could go and see the Fall one last time and wonder what version of MES we’ll be getting tonight, knowing full well it’ll either be very good or very bad but it’ll never be indifferent.

Luckily, the body of work he left behind bears repeated listening. Obviously. 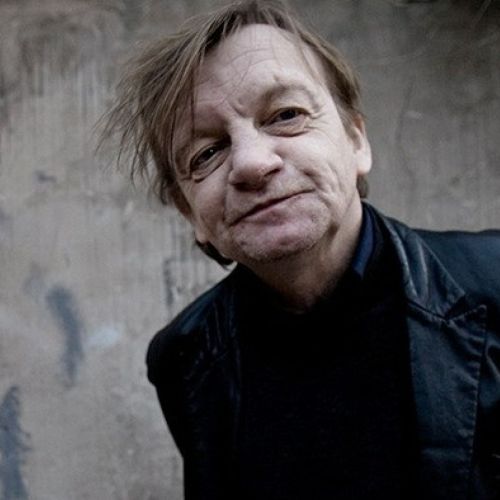 But look beyond the ‘easy’ pickings of the Fall back catalogue, delve into the forgotten, dusty, tobacco-stained nooks and crannies of the MES discography, and you find, well, you find MES being exactly the same as he was everywhere else – he was nothing if not consistent.

These different, entirely non-rock n roll contexts probably just confirm what we all knew already, that MES was a man with a profound and enduring distaste for musical boundaries and accepted idioms.

Whoever he with working with, the Fall or otherwise, he did what the fuck he liked. This stuff might be obscure, you might even call it ephemeral given what he achieved over four decades with the Fall, but MES was always as much about the leftfield, the avant garde and the plain weird as he was about ‘mainstream’ rock n roll.

That was one of the things I most liked about him.

Fistful of Credits came out on Jayne Compton’s Switchflicker label in 2000, and finds MES collaborating with Mild Man Jan aka Lord Mongo. MES is way back in the mix – at one point I think he mentions going “back down south, to the Halifax” but it’s difficlut to be sure. The song is over before you know it, but its slightly glitchy etheral harmonium vibe and gently insistent guitar will stay with you for some time.

That Sound Wiped is one of the more conventional results of MES’s collaboration with Andi Toma and Jan St Werner on the insanely fantastic Tromatic Reflexxions album. I never realised it is kind of based on the equally excellent but different Mouse on Mars track, Wipe That Sound. I think it is, anyway. It’s difficult to be certain.

Actually singing (after a fashion), as was often his wont, MES proclaims at one point: “I said, you don’t look like any goddamn singer-songwriter to me ..”

There’s a bit at the start of Inch where you get a rare and all-too-brief insight into the intricacies of the MES creative approach.

Talking to producer Keir Stewart (who was one half of Inch, alongside the late Simon Spencer), he’s ordering players around like a football manager, pruning, nipping, tucking away dead leaves like a Japanese OAP carefully preserving the zen balance of his garden – and then literally singing the intro to the track over the phone.

It’s a thing of beauty.

Call it big beat bollocks if you want, but this predatory groove from 1999 is a wonderful and marvellous thing. And that freaky-deaky Moog sound is just dirty. Distorted, hissing, slurring, MES sounds like he was recorded off a radio in the next room, like a sarcastic ghost made of static. I think it’s what he would have wanted. And is that a theremin?

Crack Man in Bat Den Sex Shock, recorded a year earlier with Simon Spencer, at that point working alone as DOSE, sounds like they were adopting the sounds and processes of distorted, high-velocity drum n bass to make a rock n roll point, only with added Moog. Point made.

The pair’s famous feud is evident. Hadn’t MES removed Simon Spencer’s production credit for The Light User Syndrome in favour of the guy from Toto Coello? I’m pretty sure I’m not making this up. There is no mention of MES anywhere on the sleeve or the label, either way.

[It turns out MES isn’t mentioned on the sleeve or the label because he’s not actually on the fucking record. Top research skills. You’d think I’d be embarrassed about this. I’m really not. It’s a great tune, either way.]

Although Theme From Error-Orrori eventually ended up as an added extra on a Cerebral Caustic reissue a couple of decades or so later, when it first came out on the Home compilation album in 1990, murkily smudging the contractual boundaries no doubt, it was credited to MES, S Hanley, S Wolstencroft and M Beddington (M Bramah under another name), so I’m having it for this.

Whoever the heck it is credited to, the typically opaque Theme From Error-Orrori is vintage Fall – check the B-line – from one of the group’s more intriguing short-lived personnel shuffles, and it’s as good a way to finish here as any.

You can download a short mix of these tunes below.

And maybe raise a glass to the man himself while you’re at it.